Does "Redshirting" in the Classroom Benefit Your Child?

Did you know…Albert Einstein was held back?

Is your son or daughter turning 5 years old this summer? Are you considering waiting another year before sending him or her to Kindergarten? If you are, you’re among many parents who are looking to give your child better odds for success by holding him back an extra year – in other words redshirting.

Redshirting is a term originally used in sports. According to Wikipedia, a redshirt is a term used in American college athletics that refers to a delay or suspension of an athlete’s participation in order to lengthen his or her period of eligibility. Academic redshirting refers to postponing entrance into kindergarten for age-eligible children. Much like redshirting in sports, the idea is that entering your child into Kindergarten a year later allows extra time for socioemotional, intellectual or physical growth. Instead of your child entering kindergarten as the youngest in his or her class, he would effectively be among the oldest in his class. In the fall of 2012, 10% of eligible children were held back from Kindergarten.

What does research say about redshirting? 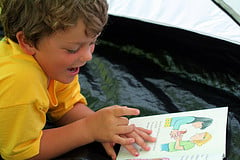 How do you decide?

When you finally make the decision to send your child to pre-school again or let him go to Kindergarten, know that you are not alone. According to the research, there were more advantages than disadvantages with waiting another year before starting Kindergarten.  What would you do?

Use Room Dividers In The Classroom To Divide Space & Conquer Distractions

Using Room Dividers in the Classroom Room dividers are a huge help in the classroom. When you need…