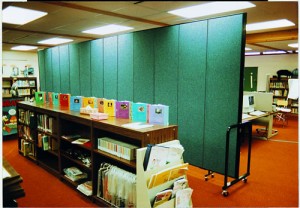 The administrators at an Elementary School in Washington had just received a grant to buy some needed computers for the school. Their efforts were very successful, and now the hunt was on to find an appropriate space within the school where an additional computer lab would be housed.

Modern space demands flexibility. Creative spaces can be multifunctional. A moveable wall within a room. Its potential is hidden. It has the capacity to create instant space.   One pull of the handle can show a two-sided room divider that is tackable and sound absorbing. It is an instant room. The school room divider can be used as a screen, a dividing wall, or an exhibition board. It can transform a room into multiple rooms. It provides an all-in-one solution to our contemporary needs, allowing several uses yet taking up a minimum of space. These computer lab privacy dividers work well for any educational setting.

Putting up permanent walls was discussed as an option. That idea was quickly dismissed. The project would involve reconfiguring heating, lighting, and electrical systems in addition to adding a doorway. This would involve investing much more than was available to spend. The search for a solution continued. The administrators found that the solution they sought was offered by Screenflex Portable Partitions of Lake Zurich, Illinois. Screenflex manufacturers a line of versatile, portable room dividers which are also sound absorbing and tackable. Since these partitions are used for other reasons such as classrooms, it was important that the dividers could fold up and store in a small space and transport easily. Each room divider also only takes up about 2′ x  3′. This feature allows easy storage, transport, and setup for your computer lab partitions.

Popular use of Room Dividers

How do we use Room Dividers? The most popular use for room dividers The open room in your…

Ways to Minimize Noise in the Classroom

It is easy to understand why students find themselves distracted in noisy classrooms.  From the stimulation of the…