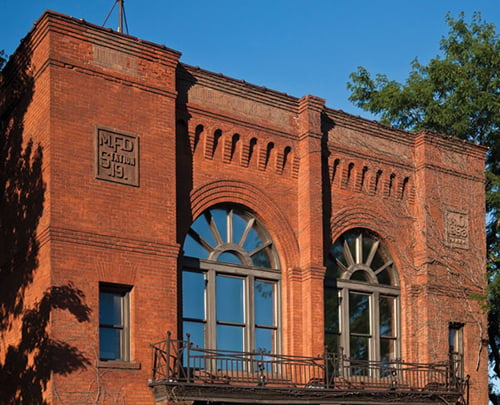 We love our Screenflex.  We use it frequently.  Our office is very open and the Screenflex allows us to section off parts of the space to create semi-private rooms. We also use it to block areas we don’t want people to go into.  Our office also has an event center so this past weekend we used it to block some unsightly shelves during a wedding.  We were able to drape fabric over it to create a softer look.  It is so easy to use and I like how we can adjust it to fit the size we need.

After the fire that devastated the University of Minnesota main building in 1892, residents demanded better fire protection. The historic fire station was built in 1893 at a time when Minneapolis was growing rapidly. Rapid growth brought prosperity to Minneapolis and taxes.  Fire Station No. 19 was one of the last to house horse-drawn equipment, as late as 1922.  In 1976 Fire Station No. 19 moved one block south.

For exercise, the firemen invented an alternative to baseball.  They called the game kittenball and what started off as a way to get exercise between fire alarms, grew into 20 local teams playing the game in leagues. Several neighboring companies participated.

Rita Hernandez-Screenflex Employee Highlight of the Month Our employee highlight this month is Rita Hernandez. Rita has worked…

Ten Facts About Screenflex Room Dividers That You Don't Know