On Saturday September 14, 2013, Screenflex Portable Room Dividers hosted a stop for the annual Hawthorn Woods Treasure hunt, a road rally, held in the suburban Chicago area.  Since its inaugural event in 1981, the popular multi-stop road rally has tested the wit and puzzle solving abilities of its participants.  In addition to having fun, the goal of the rally is to visit sites, ascertain which are the correct clues, and solve the puzzles that will lead you to the last stop, your dinner location.  This year, Screenflex Portable Room Dividers offered its warehouse as a stop along the event’s route.

First organized by the Hawthorn Women’s Club In 1981, the event has proven so popular that even though the Women’s club no longer hosts the event, many of the same teams are still going strong after thirty-two years.  Every year, fifteen, six-member teams vie for the coveted first place trophy, as well as immunity from organizing next year’s event.  Each team sets out in a single vehicle, intent on visiting all 15 sites to solve a variety of complex and often times zany puzzles. 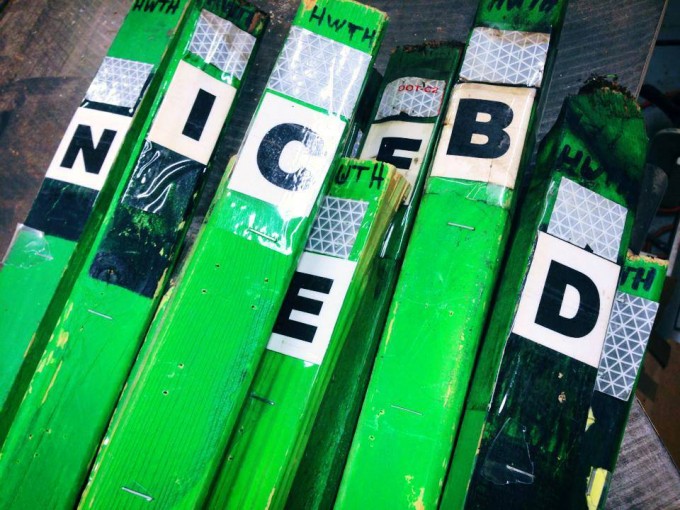 Teams receive a map and supplies with which to find the various sites and solve the puzzles.  The answer at each site is a symbol corresponding to an identifying symbol on the hunt map.  Each team’s map has about 30 symbols, some real and some not, and it is up to each team to decide if they have the correct answer needed to move on to the next site.  There are no addresses given on the maps, and sites are marked on the map with only an arrow.  To verify if a place is a designated site stop, hunters look for green stakes planted in the ground at the location.

In order to sustain such an event and keep the content fresh, responsibility for organizing and creating the sites falls on a different group of participants each year.  Planners find 15 different sites for stops on the route and dream up creative themes to tease the cognitive sensibilities of their teams.  One of this year’s planners was Screenflex employee Steve Bonesz, who took charge of the theme and clues for the Screenflex location.  Steve and his wife Mary have participated in the road rally for 10 years and have even won several times.  This is their second time planning the event. 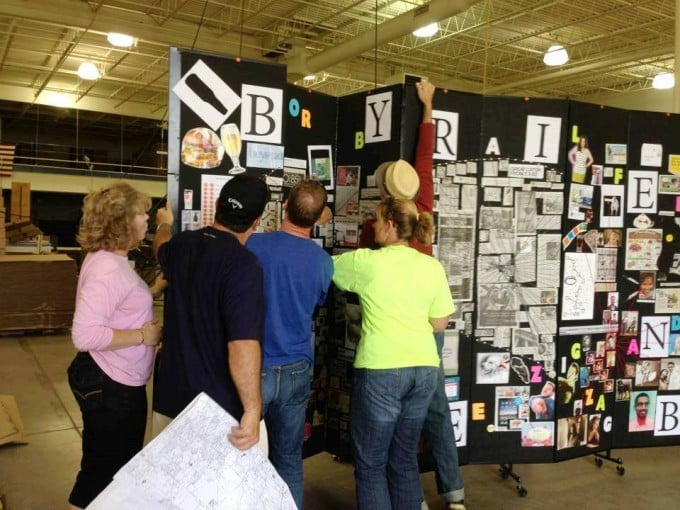 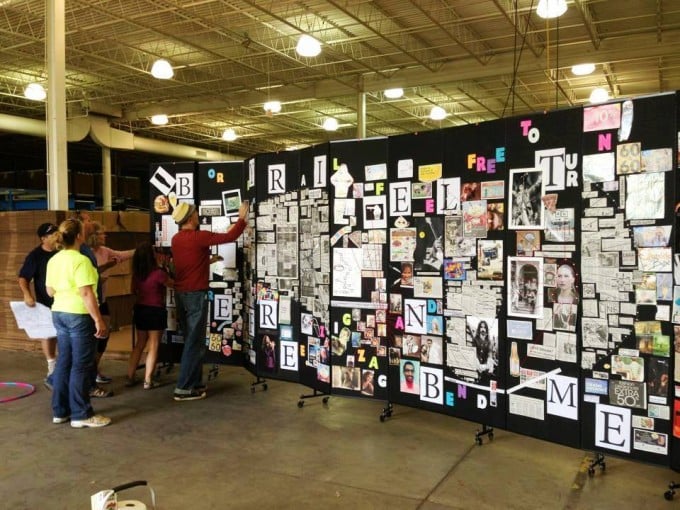 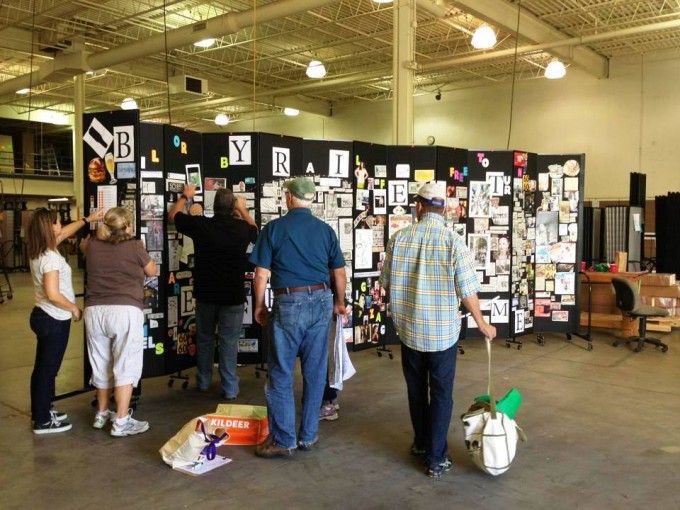 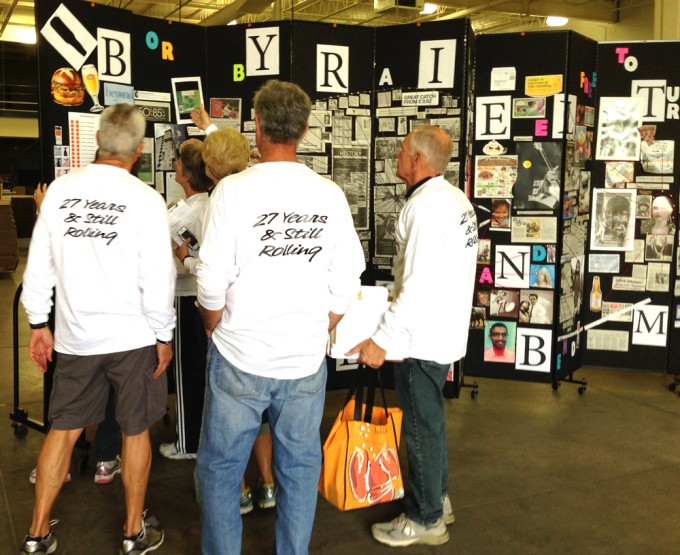 At the Screenflex site, hunters were greeted by a partly opened black Screenflex room divider.  Briefed on their task by a slightly mad scientist, hunters receive instruction on how to decode the secret government message hidden somewhere on the divider.  The hinged 13-panel, 24’ long, 8’ high divider on caster wheels, could be arranged in many configurations depending on which panels you folded and which you left open.  On one side of the divider, are seemingly random numbers, letters, magazine and newspaper articles, photos, and yarn, all pinned, stapled and taped in a connecting cobweb-like pattern, similar to that in the popular movie, A Beautiful Mind.

Written somewhere on the divider were the instructions for configuring the divider to decode the message. 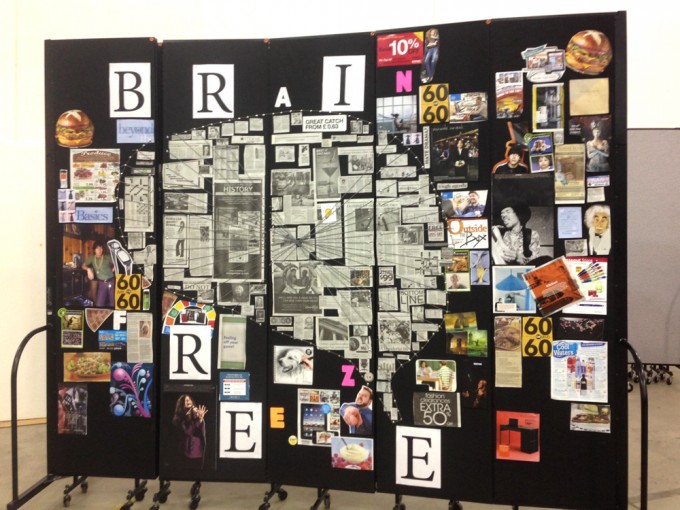 If followed accurately, the instructions should help show a large gray brain and a message could be seen.  The message, “Brain Freeze”, corresponded to an ice cream cone symbol on the map, which directed hunters to the next location, a local frozen custard restaurant.

The hunt committee was thankful for the use of Screenflex’s building and room divider product, which worked out perfectly for a folding puzzle.

The weather was perfect for the event and participants enjoyed the day, and provided they found the restaurant, the post road rally dinner.  In addition to cocktails and food, awards for the best times and scores were handed out, followed by the all-important picking of the teams who will plan next year’s hunt!

Your Personalized Logo or Image Here!

Enhance the look of any divider with a personalized mural or logo. Screenflex Customer Service Representatives are available to assist…