Class Size Matters, Or Does It? 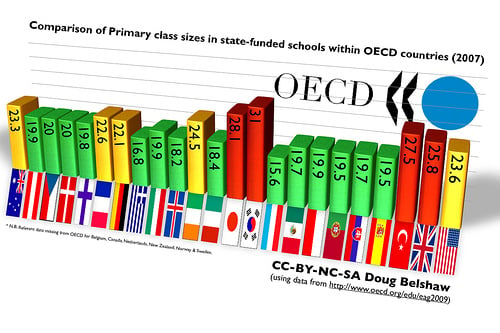 Class size has been a controversial topic of conversation when it comes to academic achievement among students, primarily those in elementary school.  Popular opinion suggests that a smaller class size results in higher academic performance and higher test scores.

So, how does class size impact student performance? Intuitively, maintaining a lower number of students per class should allow teachers to provide more attention to each child while reducing time spent disciplining disruptive students. Common sense tells us that this is true.

What does the research reveal?

Using research that expands over twenty years and observing test subject groups for over ten years, researchers have been able to turn their accumulated data into conclusions.

A Texas educational system that used data from more than 800 school districts compared the class size and test scores and found that district student achievement fell when the student-teacher ratio increased above 18 to 1 (Ferguson).

Significantly, a study that began in the late 1970’s produced findings ten years later that supports that smaller class size leads to higher student achievement.  Tennessee’s statewide Star project discovered that the learning advances in smaller classes not only benefits students while participating in the study (13-17 students to 1 teacher ratio), but the advances followed them through later years even when class sizes moved back to the average.

Serve, a federally funded regional educational laboratory for the Southeast participated in a class size reduction study in the late 90’s. In all cases, math and reading student gains increased significantly.  The interaction between students and teachers as well as students and students were also observed.  Classroom and lunchroom activities were more relaxed and organized with smaller classes.

Research tends to support the belief that smaller class size is beneficial to students and their academic achievement, but not all studies have shown that students learn more in smaller settings.

Some researchers conclude findings in a different direction.  In one of Manhattan’s worst public schools where only 16 percent of students could read at grade level maintain a smaller class size of 21 students, compared to one of the best private schools in Manhattan which averages 30 students per class and are able to maintain a reading average in the high nineties. Perhaps class size is not the only factor?

The debate over smaller class size versus cost has been an ongoing struggle for decades. Much discussion created several thoughts by both sides.

After the No Child Left Behind Act was passed in 2001, a teacher quality block grant funded $2.85 billion in 2002 to hire more teachers and lower class size.

Those who oppose smaller class size suggest that by increasing the pupil/teacher ratio by 1, the U.S would save at least $12 billion per year on teachers’ salaries alone (Brookings Institution).  Others question if there would be a benefit to lay off teachers who were not performing? Premising that by increasing the quality of education to all students, better quality teachers would lead to greater student achievement versus lowering class size (From an article by Education Next).

How about creating smaller class size by using existing space? One way school districts can utilize existing space to create smaller class rooms is to set up a portable wall.  Create a private place for reading, taking tests or conducting more than one activity without distraction.

I love the story about what Justin Bieber did for Whitney Elementary school in Las Vegas.  I'm not…

Gum Chewing In School Is Good For The Brain

Brain Power Gum chewing in the classroom is becoming more popular for its ability to reduce stress,…