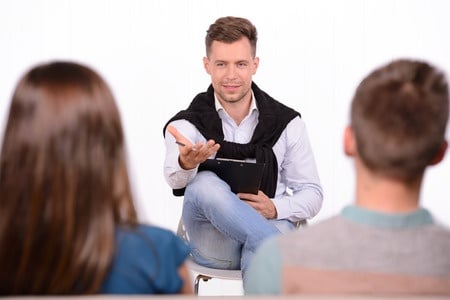 It’s tough being a teacher. If you’re not fighting to keep students interested, you’re fighting budget cuts and the ever-changing myriad of educational standards. It’s hard enough keeping your head above water sometimes and it becomes even more difficult when you face resistance from parents. When open house rolls around, you’ll inevitably find yourself faced with parents that either think you’re teaching too much or too little. Unfortunately for you, your success as a teacher is partly contingent upon the opinion of parents; and so you find yourself having to find ways to work with the problem parents of your problem students.

Make Friends – When dealing with difficult parents, the first thing you have to do is make the parent understand you that you have a vested interest in their child’s success. This is their perfect darling baby, who does nothing wrong, so you must strike the balance between constructive and caring. If you speak too critically of their child, they will assume that you “have it out for them,” which can cause parents to shut down and ignore your helpful advice. Parents need to know you’re on the same side.

Be Honest – When giving parents your assessment of their child’s development, you must pepper your criticisms with positive pieces of progress. Don’t gush with all the good stuff first; only to dump all the bad parts at the end. By spacing out and mixing up the good and bad, parents will be more willing to accept what you have to say.

It would also behoove you to keep similar records on the student in question as well; not only to prove what you said but also to make it easier for you to track the progress of the student and to offer constructive advice.

Steer Clear Of Drama – As a general rule, avoid any outside conflict that has nothing to do with education. At many points in your career, you will find parents trying to drag you into whatever muck they’re wallowing in. Whether it’s a divorce or disagreement with another parent, it does not matter; unless the health and safety of the child are involved, stay out of it.

The minute you take a side or become involved, you cease to act as a teacher and you become a participant. If parents continue to press you, politely decline to comment and tell them something to the effect of “I apologize, I know this is an important issue with you, but professional ethics forbid me from becoming involved.” They may not be happy with your answer, but they also won’t accuse you of playing favorites either.

Pace Yourself – If you find yourself confronted with a difficult question, don’t rush to answer it. Just because you’re the teacher doesn’t mean you will have all the answers. It’s ok to tell parents that you don’t know as long as they believe you when you say that you will find out. Giving a knee-jerk response to a parent is worse than giving no answer at all.

Above all else, remember that you are professional. Most parents are normal, rational people, but when you throw their child into the mix they will turn into crazed beasts bent on your demise. They may get hateful, they may get personal, they even make you want to cry; but don’t let them get to you. It is your job to be rational to be the rational one. Remember that at the end of the day, these parents don’t go home with you. As long you do your best by the student and follow this simple advice, you’ll be just fine.

5 Things Every New Teacher Should Know

Congratulations, you have finished your collegiate education and now you are about to start your new job as…

Teachers and Teach for America: The Right Mix?