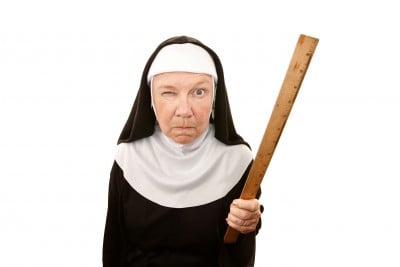 Like all of us, I learned to read and write and count when I was quite young. Soon after learning to add and subtract I was introduced to something I’ve always felt was a “monkey wrench” thrown into our education system.

“All right class, today we’re going to learn how to measure and use a ruler”. “The first thing I want everybody to do is to forget everything you know about numbers and math because we’re going to measure on a totally different system today. Instead of a 10 based system, we are now going to use a 12 based system”. Say what?

I’m not sure if my teacher used words similar to this or not, but she might as well have. Everything we know in life comes naturally to us from a 10 based numbering system. Why? Well probably because we have 10 fingers and 10 toes. A human fetus discovers its fingers while developing in the womb. It’s toes come next. Curled in the fetal position, fingers and toes are about all a developing child knows. Once born, I’ve seen many baby’s sit fascinated by their fingers and toes for hours on end. As we all know, there are 10 of each. A baby might not be able to count them or to assign names to them yet, but rest assured they are familiar with them.

One of the reasons we learn to count so easily is we have this built-in abacus at the end of each limb. The number 10 is so natural to us that we have to ask ourselves “Why are we still measuring in 12’s? In fact, as recently as last year (Dec. 31, 2012) a White House petition is attempting to have Americans voluntarily switch from the Imperial system to the metric system.

Screenflex sells a room divider which is 20′-5″ long. If I had a nickel for every time someone repeats back to me that they want the 20 and a half-foot long divider, I’d be rich! 20 foot, 5 inches is not the same thing as 20 and a half feet.

I was in high school when Congress passed the Metric Conversion Act of 1975. I was certain that sometime in the near future we would all be following it. For a while, U.S. schools did attempt to teach this new method of measuring, but it was not at all successful. A big reason is that it has always been taught as a conversion process ie. measure in feet and inches, then convert to metric. The problem is you never do away with the feet and inches in the first place. You’re just adding a new calculation into the mix.

I would contend, that the way to switch us over would be to pick a date and just switch, across the board. Just start using metric everywhere at the same time. How hard could it be? 10 based systems are present in everything else we do, it’s only natural.

Although a 48-yard field goal does sound more impressive than a 43.9-meter field goal. And a 4-foot wide pothole sounds much more menacing than a 1.2-meter wide pothole. And who cares if we bend to Europeans ways anyhow? Already we speak English, not American. Americans have borrowed everything else the world has to offer, so what’s the big deal with a measuring system?

Help For Dyslexia In The Classroom Builds Confidence & Success

Life in the classroom can be difficult for a dyslexic child. Though these children seem to be bright…